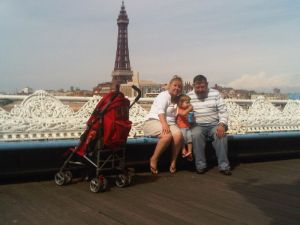 Well we’ve been back in Australia for almost a week and, except for the jet-lag, have settled back into our daily routine.

I should’ve blogged more frequently while we were back in England, but I just didn’t get a chance because we squeezed so many things into this trip. I’ll upload some pictures as soon as Sara empties her digital camera.

Here are a few highlights:

We also had some business to take care of: closing some old bank accounts and carrying out an inspection of our old house on Ripponden Road, which is currently vacant again and desperately needs a lick of paint. :)]

We were stunned by how cheap things are in the UK. We’ve become used to having less choice and paying over the odds for groceries and clothes in Australia; our visit to the new HUGE Tesco on Huddersfield Road made us realise what we’re missing down under. The Aussie supermarkets are very poor in comparison. $-)

It was fantastic seeing everyone again but, as happened on our last visit, we just ran out of time and couldn’t visit everyone. :((

Luckily we managed to avoid the volcanic ash cloud and the British Airways strikes on our way home. I was back in work the next day, which forced me to adapt to the different time zone, but Sara and Charlotte are still struggling. It’s nice sleeping in your own bed though, after three weeks away from home. |-)

I’ll upload some photos to t’gallery when we’ve had a chance to sort through them.

4 thoughts on “Back from the UK”