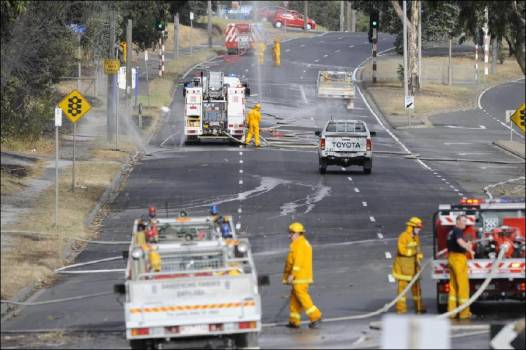 It’s been stinking hot in Melbourne for the past three weeks, with most days in the mid-30s, but yesterday was the hottest day since records began — temperatures hit 47.9Â°C (118Â°F). #:-s

On top of that, we haven’t seen any significant rainfall since before Christmas so there’s been a real threat of bushfires, like the famous “Ash Wednesday” fires 25 years ago which destroyed over 2,000 properties.

We have been hearing reports of bushfires over the past couple of weeks but they were in other parts of Victoria. Yesterday, however, we were pretty close to one ourselves.

It’s very busy at work at the moment, so I had to go in on Saturday for a few hours. By the time I got home I could see dark, smokey skies beyond Mount Dandenong. I turned on the news and checked the Country Fire Authority website. Apparently there was a huge blaze in the Bunyip State Park, about 25kms further East than us. Nothing for us to worry about.

We decided to treat ourselves to a take-away curry from our usual Indian restaurant. Sara phoned through the order and set off to collect it, but she called me a few minutes later to say that police had closed Forest Road and Burwood Highway. I explained an alternative route, going via Glenfern Road and coming down from Upwey, so off she went.

Meanwhile I took another look on the CFA website and saw that there was a blaze at Quarry Road, Ferntree Gully — it must’ve been a big one because there were 14 fire engines in attendance. I called Sara and told her what was going on, just as she arrived at Upwey and found the police had closed that route as well. :-ss

By now I’m thinking “I really fancy that lamb vindaloo, but I don’t like the idea of Sara being so near to a bushfire and, if the police close another road or two, she probably won’t be able to find her way back home”. We played safe and abandoned the idea. :-t 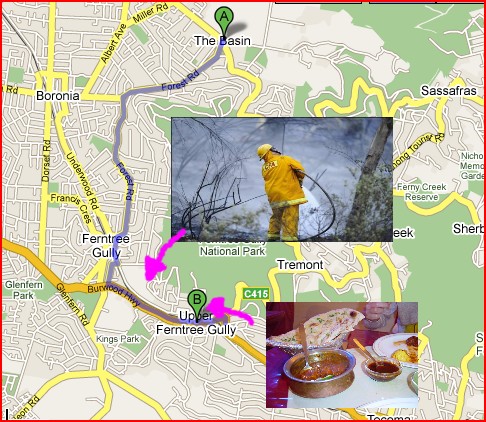 Edit: The nearby fires are now under control. It’s a lot cooler today and we’ve actually had a short rain shower too.

7 thoughts on “Melbourne Bushfires â€” Near Us!”