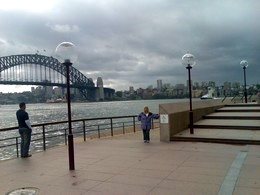 Last Monday was a public holiday here in Australia, to celebrate your Queen’s birthday. Gawd bless her. <):) Unfortunately I had to work over the long weekend up in Sydney, finishing off a relocation project that I've been working on since January. Sara flew up to join me on Friday afternoon, pottering about in Parramatta and chilling out at the hotel when I had to work. |-) Having put in very long hours on Friday and Saturday, I took Sunday off to do a bit of sightseeing with Sara. Even though this was my 10th trip to Sydney I've never really done anything touristy, so we hopped on the train to Circular Quay and wandered about Darling Harbour taking in all the sights. The weather was pretty good, considering it's the middle of winter down under. We had pre-booked a table at the trendy Cafe Sydney restaurant, situated on the top floor of Customs House with spectacular views of the bay, Harbour Bridge and Opera House. It was the perfect lazy Sunday atmosphere; we spent a relaxing couple of hours, people-watching whilst enjoying live jazz music and absolutely superb food. =p~

After lunch we took another stroll around the quayside, taking in some of the street performers (I even got roped in to participate in one show!) and had a few alfresco drinks along the Opera House concourse. It felt like being on holiday. b-)

Sara flew back on Monday but I stayed until Thursday (Wednesday night was some big “State of Origin” rugby event, Parramatta was heaving). Enjoyable though it was, hopefully that’ll be my last trip to Sydney for a while. #:-s

2 thoughts on “Sightseeing in Sydney”