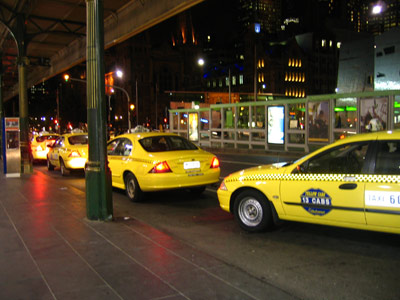 Why is it so difficult to get a taxi in Melbourne’s suburbs? ~X(

Apparently there are 4,425 licenced taxis in Victoria, most of which operate in the Melbourne metropolitan area. You see them all the time when you’re driving around — they’re all bright yellow — but when you actually need to hire one, they’re nowhere to be found. :-??

We originally planned to spend New Year’s Eve in the city, watching the fireworks on the banks of the Yarra. Getting into Melbourne wouldn’t be a problem — free trains and trams operate until 3am on New Year’s Eve. We knew, however, that getting back from Bayswater station afterwards could be tricky, so we decided to stay close to home instead.

So we drove up to our “local”, the Oak Tree Tavern. We had to pay $15 entry (or $35 including a carvery meal) but at least entertainment was laid on and we could get to the bar without fighting through a crowd. Surprisingly they didn’t bother with the countdown to the New Year or Auld Lang Syne. :-”

Knowing that we’d have to wait ages for a taxi after midnight, we called for one at about 11:30. “It’ll be with you in 15 minutes” said the operator. Yeah, right… half an hour passes and it’s 2007. <:-p We call back and get the old "It's in your area now, it'll be with you in 10 minutes" line; it seems like taxi operators the world over are trained to lie. No problem, we'll just have another drink while we wait... and another... We call back and the operator finally admits "Look, we have no idea when we'll be able to get a taxi out to you - it could be a couple of hours or more". :)] So, with no other option, we set off walking. It's quite a long walk home when sober but, when you're fuelled by Old Speckled Hen and Stella, it takes twice as long. At least it was a warm night. #:-s So why don't they have more taxis in Melbourne? Or perhaps have little taxi offices in each suburb, like in the UK? Because in order to operate a taxi in Victoria you need a government licence, which costs over $300K per cab. The companies who currently have paid for these licences would demand compensation if more licences were made available. Obviously the drivers prefer to operate in and around the City centre to maximise their profits, so the out-of-town customer has to suffer during peak times. 🙁