It’s the CeBIT Business Technology Exhibition at the Sydney Convention Centre this week, so I’ve travelled up to New South Wales to pay a visit and will be working out of the company’s Silverwater office for the rest of the week.

Usually I fly up to Sydney but, with Sara and Charlotte being overseas, I thought I’d take the opportunity to put some miles on the new car and see a little bit more of Australia along the way.

As you can see from the picture above, Australia is bloody enormous, so this little trip is going to be around 2000 kilometers — about the same distance driving from Manchester to Rome. Here’s my planned route: 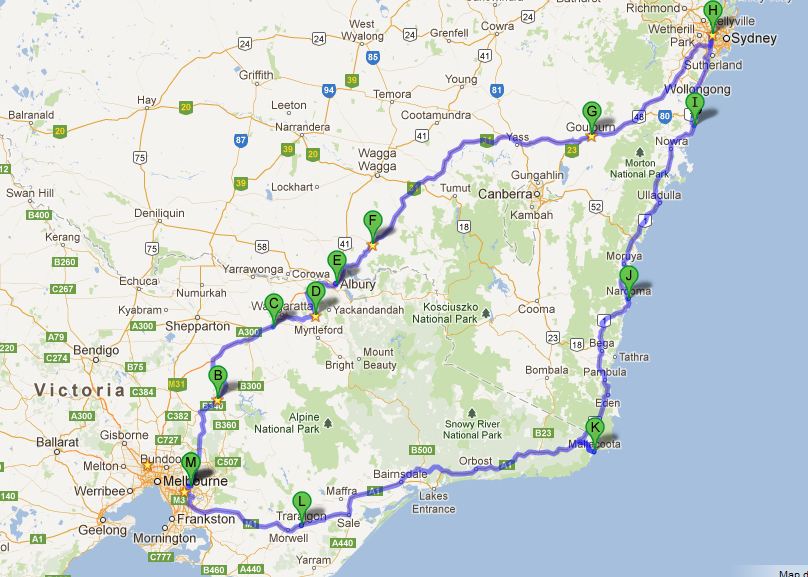 I set off yesterday lunchtime, heading North along the Maroondah Highway through the Yarra Valley wine region and winding through the Kinglake National Park.

This route took me through a little place called Yarck (population 223) which I was curious to see, mainly because half of the utes in Melbourne seem to have a “Where the fark is Yarck?” bumper sticker. Pub? Check. Post office? Check. Grocery shop? Check. Anything else? Nope.

I then joined the Hume Highway, the 880km direct freeway route between Melbourne & Sydney, at a town called Euroa and set the cruise control at 110km/h (68m/h) for a while. Ready to stretch my legs after three hours at the wheel, I took a short break at Glenrowan which is the town where Ned Kelly, the infamous Australian outlaw, was finally gunned down in 1880. I also took a short detour off the freeway to visit Beechworth, a former gold rush town, which added 20 minutes or so to the journey.

After rejoining the Hume, I floored it — as much as you can with so many speed cameras around — and crossed into New South Wales. After nearly five hours on the road passing through tiny one horse towns, Albury, the first major town in NSW, seemed really industrial and featureless.

About 45 minutes later I stopped to refuel at Holbrook — $1.67 (Â£1.03) per litre for 98RON unleaded, the most expensive I have bought in Australia! Strangely, Holbrook is famous for having a full-sized submarine on display in the middle of the town, despite being more than 400kms away from the ocean. I didn’t bother with a visit to the maritime museum.

As daylight started to fade I was still more than 400kms away from Sydney. Driving on the interstate freeway really isn’t pleasant at night; you see plenty roadkill — foxes, possums, wallabies, kangaroo — all along the hard shoulder and, unless you’re driving one of the many road trains, stray wildlife could cause some serious damage to your vehicle. There’s no street lighting whatsoever, so when there’s no traffic ahead you have to rely cat’s eyes in the road (or Sat Nav in my case) to warn you of upcoming bends; it requires a lot of concentration.

It was pitch black by the time I reached the town of Gundagai — the traditional half way point in the journey — but it’s really not a place I wanted to stay, so I persevered in total darkness for another two hours and eventually reached Goulburn (population 20,127), allegedly Australia’s first inland “city”. It’s also home to the Big Merino, a giant concrete statue of a sheep.

I’d had enough for one day. I checked into a flea pit motel, found the nearest pub for a bite to eat and planned the last 200km push into Sydney the next morning.

I’ve learned that driving interstate in Australia is incredibly boring. Fortunately I had numerous podcasts and audio books to keep me entertained along the way — I even gave the “Teach Yourself German” CDs another try. The inland route is extremely tedious with virtually nothing interesting to see along the way (including the submarine and giant concrete sheep), so I’m looking forward to taking the more scenic coastal route on my way home on Friday.

One thought on “Road Trip”