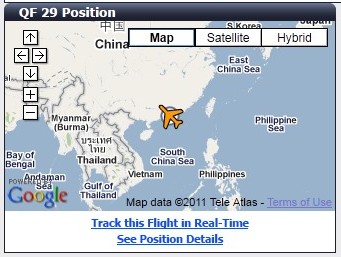 Sara and Charlotte are currently on their way back to England. :-ss

I drove them to Melbourne airport last night and, after a bit of a drama at check-in regarding the validity of our Australian Visas, they boarded flight QF29 to London (via Hong Kong). Hopefully Charlotte slept for most of the first flight, as it was already well past her bedtime when we said our goodbyes. :(( 😡

I haven’t heard from them along the way because Sara’s phone plan isn’t enabled for international roaming, but I’ll assume they’re OK. According to Google the flight left Hong Kong on time and it should be touching down at London Heathrow in around four hours from now. Then it’s just a short shuttle flight up to Manchester where Louise should be waiting to whisk them off to Granny’s house for the next seven weeks. 😮

My own trip begins on Tuesday, when I fly to Brussels for a couple of days and then on to head office in Munich. I’ll be arriving in Manchester myself late on the 7th May, staying for just for just a week.

So what am I doing with myself for the next couple of days? Rattling around the house on my own, currently tidying toys away while listening to music at a much louder volume than I normally can, trying to figure out how the washing machine works… Sport channel is on Foxtel ready for United vs Everton, beers are in the fridge, toilet seat is up! <:-p \:d/ Call or text me when you can, Sara. :)] :*