I’ve just noticed that the “Gadgets” category hasn’t been updated in the last 18 months. l-)

Obviously I’ve bought loads of gizmos since then, so here’s a round up of some of the more interesting ones: 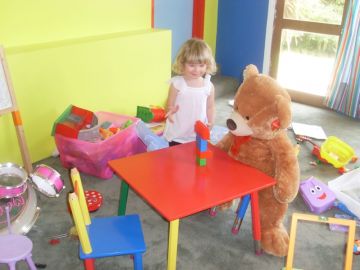 I promised that I’d update the blog more often in 2011, so here’s a quick post to show how we converted our downstairs workshop into a bright playroom for Charlotte. I’ve added a new gallery with about 40 photos showing how the work progressed. :-”

Basically we had a large, unused room under the house which the previous owner used as a workshop for building model ships. There was no internal access, you had to go outside to enter through a separate door. Although it was handy for storage, we weren’t really making good use of it. Inside it was pretty basic: exposed rough brick walls, a cold tiled floor, a big old radiator and a couple of fluorescent strip lights. 🙁

So, because the room is directly below our living room, we came up with the simple idea of cutting a hole in the ceiling and installing a staircase. As with any renovation project, we hit a few snags along the way:

As you can see from the top picture, Charlotte loves it. That said, she still brings all her toys upstairs to make the living room messy, but we’re working on that. :-w

There’s still a bit of work to do: skirting boards, boxing off underneath the stairs and fitting a new front door (we now have two!) but the room is usable so these jobs can wait. We’re going to continue with the living room next, so that we can call this end of the house finished. The other parts (kitchen, bedrooms, bathrooms) is going to be a heck of a lot harder. We’ve also realised that our renovation budget is not going to be enough if we have to rely on tradesmen, so I predict we’ll be learning some new skills this year! #:-s