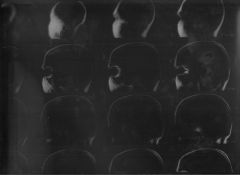 As mentioned in the last blog post, Sara hasn’t been feeling too well recently. The doctor initially diagnosed an inner-ear infection, so Sara took the prescribed tablets and followed the recommended exercises, but the dizziness didn’t go away. After about six weeks of this, they finally referred her for an MRI scan.

We went to the Radiography Clinic at Maroondah Hospital on Tuesday afternoon. Whilst Charlotte “rearranged” the magazines in the waiting room, Sara went into the big scary machine so the doctors could photograph her brain. See picture, above.

Looking at this scan, although I’m not an expert in this field, I reckon there is normal sulcal anatomy and the lateral ventricles and basal cisterns are normal. The corpus callosum appears within normal limits as well and no pituitary or suprasellar pathology is seen. There is no posterior fossa mass lesion and the fourth ventricle is midline and symmetrical. No CP angle or prepontine pathology is seen. The seventh and eight cranial nerves are well visualised bilaterally. No acoustic scwannoma is iseen on either side. The membranous labyrinth appears normal bilaterally and no middle ear opacification is seen. The mastoid air cells are well aerated. There is an incidental finding of mucoperiosteal thickening and polyp formation in both maxillary antra with partial ethmoidal opacification on the right, with slight mucoperiosteal thickening involving the right frontal sinus. There is an additional incidental finding of asymmetry of the globes with prominence of the right globe when compared with the left. There is no proptosis and no intra or extra-conal mass lesion seen. There is normal patent flow void signal intensity within the intracranial vessels, and the diffusion weighted images are unremarkable. :d

So, basically, there’s nowt wrong with Sara’s brain and the doctor’s diagnosis of an viral infection still stands. He says it will clear itself up in due course. 🙂

Even though this is a relatively minor problem, when they start arranging brain scans you can’t help but worry. Thankfully Sara will be around for a while longer, so I won’t have to raise Charlotte on my own in a dirty hovel, dressing her in pyjamas all day and feeding her chocolate and bread until she’s old enough to run away and join the circus. Phew. #:-s

PS. I wonder how many hits this page is going to get because of people googling these medical terms!