Charlotte celebrated her first birthday last weekend, so we threw a party to mark the occasion. <:-p As well as the usual relatives we invited all of Charlotte's friends from playgroup, a few neighbours and Sara's relatives who we discovered live just a few miles away. Sara and Caitlin made posters and we decorated the house with photos, balloons and streamers. We had a cake made by a local bakery and laid on a bit of a buffet. \:d/ Charlotte's main presents were an inflatable car filled with balls, a Shrek bouncy castle and an Elmo puppet (which kept the kids entertained all afternoon). She also received heaps of nice clothes. She had a great time. :d It's hard to believe that she's a year old already, time has flown by. But she's changed so much in recent months. She's now walking confidently, chatting nonsense to herself, she's got four teeth, she can wave bye bye to visitors and claps along happily to the "if you all hate scousers" song. =d>

I’ve added about 60 new photos to the gallery. We also took a lot of video which I’ll make into a movie clip soon. 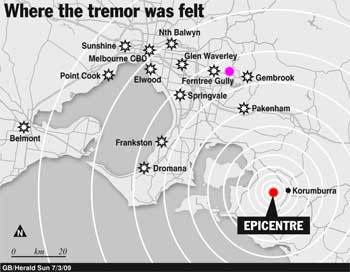 As if the threat of bushfires wasn’t enough, last night we experienced an earthquake measuring 4.6 on the Richter scale. 😮

As you can see on the map above, it was centred about 50kms south-east of where we live but we certainly felt it. The whole house shook for about 10 seconds with enough force to open some of our cupboard doors. :-ss

I’ve checked the house today, including the stumps underneath it, and thankfully it didn’t t cause any visible damage. It was pretty scary though. #:-s