We’ve still got a bit of unpacking to do, but we’re now settled in our new house. :d

After being here for almost two years and looking at literally hundreds of properties, we finally found a house that we wanted. It’s in a place called “The Basin”, which is a quiet, leafy suburb at the foot of Mount Dandenong in eastern Melbourne. It’s a lovely spot, right on the edge of the Dandenong Ranges National Park yet only a 15 minute drive to work and a 10 minute walk to the shops (and pub).

The house itself is quite quirky. It’s a typical 1970s Aussie brick house, but the previous owner — another British ex-pat — has extended it significantly and rendered the outside to look like a Tuscan villa. It currently has five bedrooms, two of which are in a self-contained apartment above the double garage which we intend to turn into guest accommodation. It has a workshop under the house, a home brewery and a large garden with a heated swimming pool. 🙂

It has “hydronic” heating, i.e. a boiler and radiators, which is very rare in Australia but suits us perfectly — our previous house had feeble hot-air heating and poor insulation, so it’s really nice to be warm and cosy on these crisp winter mornings. =d>

There’s a lot of work to do though. Although it’s perfectly liveable, it needs some modernisation — out with the avocado and purple bathrooms, open up the kitchen and redecorate throughout, including getting rid of the Artex plaster that is on virtually every wall — but there’s no hurry, we can do it at our own pace.

The only urgent bit of DIY we have to do is replacing the back garden fence, as Victorian law states that swimming pools must be surrounded by a fence that can’t be climbed by children. We have 30 days from moving in to rectify the situation otherwise the council can force us to drain the pool and, with water restrictions still in force, we’d probably have to pay to have it refilled by tanker. So over the past couple of weekends me and Andy have ripped down the old trellis-clad range-style fence and started to build a new child-proof one. It’s bloody hard work but it’ll all be worth it in summer when we can just chill by the pool. #:-s

I’ve added a new photo gallery showing pictures of the house. We’ll add more pictures to it once our cable internet is connected, hopefully by the end of the week if Telstra don’t screw up the order for a fifth time. x( 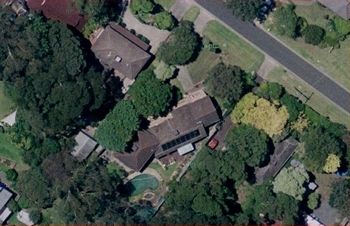 Three weeks ago we moved into our new house. It’s fantastic. :d

Unfortunately we’re still waiting for Telstra (the Aussie equivalent of British Telecom) to connect our internet service, so we haven’t been able to blog about it yet. :-w

Hopefully we’ll be online by weekend so I’ll post a full update then.

Edit: In the meantime, I’ve added another four pages of Charlotte photos to the album. 😡