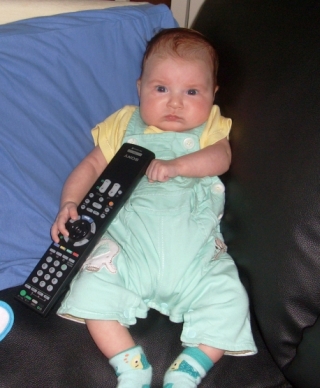 It’s been nearly a month since our last blog update, so I’d better do a quick round-up of what’s been going on:

Charlotte is now 14 weeks old and is developing her own little personality. As well as letting us know when something isn’t right — hungry, wet, tired, etc — she now smiles and chuckles when Sara and I do as we are told.

I went to the CeBIT Exhibition in Sydney last month. Sara and Charlotte flew up to join me for a few days, it was a nice break. We watched Manchester United win the Champions League at the hotel. John “Captain Courageous” Terry missing his penalty was hilarious, it couldn’t have happened to a nicer guy. Thanks for all the funny texts and emails, sorry I haven’t replied to any — it’s been hectic at work this past couple of weeks. #:-s

We’ve had a nightmare month dealing with things back in the UK. We’ve been trying to remortgage our house in Oldham so that we can buy a property out here — more about that soon. Barclays assured us that this would be a simple process and all would be completed within 6 weeks; 11 weeks later and it still wasn’t done, meaning that we were in real danger of losing our new house and incurring severe financial penalties. x(

On top of that, the estate agent managing our property in the UK, Key Moves, ceased trading last week. No great loss, they were shocking. But as yet we haven’t had any correspondence from the new company who have taken over their affairs. The tenants seem OK though, so we’re not too worried about that at the moment.

It’s a public holiday here on Monday — the Queen’s Birthday — so today we’re going to head over to Mornington for an event called “UK Fest” to sample some traditional British Fayre. Sara should be able to stock up on crisps and I’ll sample the “Three Lions Pub”. :d

Edit: UK Fest was pretty poor, definitely not worth the $20 entrance fee. There were only three or four stalls, selling overpriced stuff we can easily get elsewhere. The “pub” was a draughty hall with $8 cans of John Smiths sold through a serving hatch. The live entertainment — Morris Dancing and a Magician — wasn’t our cup of tea either. At least it was sunny. No chance we’ll be returning next year unless they change the venue and drop the entrance price. 🙁