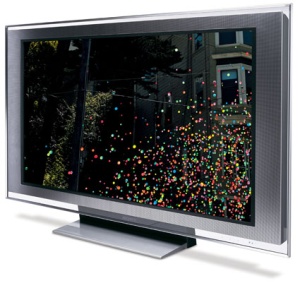 At last… kicking and screaming our way out of the 1990’s, we’ve finally bought ourselves a widescreen TV. =d>

When we arrived in Australia I was quietly disappointed that our 15-year old, square, Sony CRT survived the journey. I was secretly hoping it would die during transit so that we could replace it with something more modern. :-w

Having done my homework over the past few weeks, I knew which model I wanted — a Sony Bravia X series — but getting approval from the financial controller was another matter entirely. So I had a few cheaper options lined up when we went shopping this morning. :-@

We mooched around The Good Guys, Retravision and JB Hifi, playing the salesmen against each other — it wasn’t difficult to get 15% off the already-discounted sale prices.

The Sonys were still quite a bit more than we wanted to pay but, thanks to a timely promotion, this month they come with a free PS3 console. That can flogged on Ebay for $750, bringing the cost of the TV down to almost an affordable level. =p~

So, after a bit of traipsing around, we ended up coming home with a 46″ Bravia XBR — it barely fitted in the back of the Land Rover, it’s bloody massive! :d

Tonight, after watching Match of the Day, we enjoyed Casino Royale — well, it is Christmas after all — it was like being at the cinema! @-)

Christmas Dinner was at our house this year. We were joined by Andy, Johanne, John, Marian and all the kids and, despite the weather, we laid on a full traditional dinner with all the trimmings. <:-p We ordered a 6kg turkey from the local butcher which, fortunately, just about squeezed into the oven. All the veggie peeling and preparation was done on Monday, which made things a lot easier for us on Christmas Day. #:-s It was a good day -- everyone ate too much, had a few drinks and enjoyed a nice relaxing afternoon.

Presents-wise, Sara got a new mobile phone and a digital camera. I got a much-needed new keyboard and mouse for my computer. Boo Boo got a bouncer to match her pram, plus heaps of cute clothes. :d 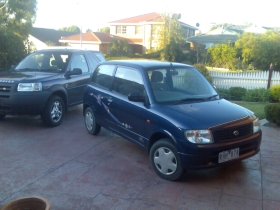 It has served us well, but the time has come to to say goodbye to Sara’s little car. :-h

With temperatures now in the mid-30s as we approach Christmas — that’s just short of 100 degrees Farenheit — it’s impossible to drive a car without air conditioning out here. Especially if you’re nearly 7 months pregnant. #:-s

So we’ve been looking for a suitable alternative, but there’s not a lot of choice in the small car market in Australia:

So, until last weekend we were stuck. We considered importing another small Japanese “K-Car”, like the Subaru R2, but didn’t want the hassle when it needed a service or repairs. Four doors are essential with baby on the way, so we discounted the forthcoming Fiat 500 as well. 🙁

Impressed with her little Diahatsu Cuore, Sara actually seriously considered the Sirion — one of the most ugly cars I’ve ever seen. There had to be something better out there! :-&

But last weekend Nissan introduced the Micra to Australia — the same model of Micra that has been available in the U.K. for about 3 years already. So we popped down to Ferntree Gully Nissan and took one out for a spin. Unbelievably it ticked all boxes — small enough, four doors, can see the corners, air conditioning, power steering, ABS, automatic, lots of airbags, sporty, not too expensive.

We spent ten minutes haggling to get a good trade-in price for Sara’s clown car — I played the “I know it’s shit but you must be able to do better than that on launch day” card — then we did the deal and picked the colour. :d

All that remains is for Sara to decide what number plate she wants. Out here you can have the usual six digit random plate for nothing, or for about Â£150 you can pick virtually anything you like with 4-6 letters if it hasn’t already been taken. You can even choose the colour you want. If you like you could get OLDHAM on a dark blue plate, or MUFC99 in red and white, for example — how much would those cost in the UK! $-)

So Sara will definitely pick something distinctive for the new car, but because custom plates take up to 21 days to arrive, we might have to collect the car with ordinary plates and change to the personalised ones afterwards. But she can collect her new car on Wednesday. :”>

Driving in Melbourne is a lot easier than in the UK. The roads are generally wide and straight, with extra lanes added just before you reach most intersections. It’s easy to navigate because main roads tend to be either North-South or East-West, so you can usually reach your destination with only a few changes of direction. The road signs are good, almost identical in style to those in the UK, and traffic lights usually have filters for people wanting to turn left or right, which keeps traffic flowing at peak hours. 🙂

But there are some downsides too. Aussie drivers are quite aggressive: they tend to accelerate hard away from the lights, change lanes frequently to get through slower-moving traffic and sit right on your tail (yet bizarrely they leave huge gaps in front when waiting at lights). 😕

The other odd thing to get used to is that distances and speeds are measured in kilometers, rather than miles. Motorways are usually 100kmh (62mph), main roads are 70-80kmh (50mph) and suburban roads are typically 50- 60kmh, except when passing schools.

Unlike the UK, there aren’t many speed cameras in Australia. They also publish the location of all fixed speed cameras on a website — there are only about 150 of them in the whole state of Victoria; none at all on my usual route to work. However they occasionally use mobile speed cameras on certain roads: you can usually see an estate car with tinted windows parked on the grass verges of straight roads. Oncoming drivers tend to flash their headlights to warn you as you approach one. 😉

Unfortunately a couple of weeks ago I was caught by a temporary camera in Ferntree Gully, allegedly doing just 5kmh over the limit. Sadly you only get a straight 3kmh tolerance here, unlike the 10% allowance in the UK. So I’ve copped a $138 fine and one demerit point on my licence. :((

However, I’ve just found this website, which offers a chance for me to plead my way out of it. It’s got to be worth a try, based on my previous good character and unblemished driving record. o:-)