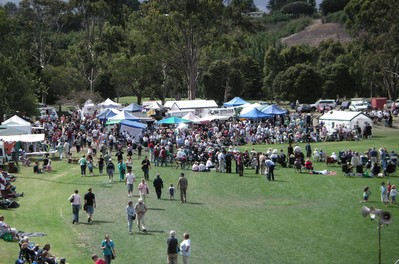 Today we’ve been to the Highland Gathering in Geelong, about 80kms west of Melbourne on the Bellarine Peninsula. We quite liked the look of Geelong’s waterfront as a place to live when we came here on holiday a couple of years ago, but unfortunately it would be difficult to find work out there. It was nice to go back for a visit today and the location, Queen’s Park, was ideal for this sort of outdoor event.

Of particular interest was a stall called “Rob’s British Butcher”, based in Dandenong, who claimed to sell pork pies — something that doesn’t seem to exist out here — but sadly they weren’t on offer today, although he was doing a roaring trade in black pudding, cornish pasties, potato scones and Lorne sausage. :@)

It was a really enjoyable day out, particularly because the weather has now started to cool down — today was like a sunny English summer day, rather than a 30-odd degree scorcher. Which suited all the fair-skinned, ginger-haired, ex-pat Jocks nicely. :-l

There’s not much to report recently, so I’ll just leave you with this strange video clip I found on YouTube:

A poor performance from United on Saturday, but a great result. Well worth staying up until 2:30am. (:|

I’ve always said John O’Pie is a good player and I was really pleased when Fergie decided to bring him on as a replacement for Larsson. :^o

The main reason for this post, however, is to show off my new “calm down, calm down” Scouser smilie: