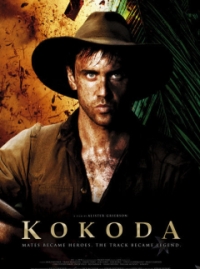 Inspired by our walk up the “1000 Steps” Memorial Trail a couple of weeks ago, last night we watched Kokoda – a film about the Aussie soldiers who battled, against enormous odds, to prevent the Japanese from claiming a vital supply route during World War II.

We had never heard of the Kokoda Campaign before we came to Australia and certainly weren’t aware of the strategic importance of Papua New Guinea. It’s quite a graphic film and — like the hike up the 1000 Steps Trail — it gives a small insight into what the conditions must’ve been like for the soldiers at the time.
It’s well worth downloading going to see.

(Unlike Clerks II, which we watched at the Chirnside Park cinema complex couple of weeks ago. That was absolute rubbish — so bad, in fact, that we left half way through.)

On Friday our broadband supplier, Wild IT&T, is supposed to be disconnecting us from the troublesome SPT network and reconnecting us to the superior NexTep network. :-b

Over here, switching from one ISP to another is officially known as “churning”.

Despite advertising themselves as a truly unlimited ISP, many of their customers on the SPT network have been throttled to a maximum of 130Kbps for the past few weeks and ping times from international sites have been very poor. After complaining to the company’s Managing Director, they eventually arranged for our connection to be churned over to the “best broadband platform in Australia”. 😐

Hopefully it will all go smoothly but, having dealt with Wild’s so-called “customer services” department previously, I’m half expecting us to be without internet access for a few days. 🙁

Edit: I’m finally back online. No thanks to Wild’s crappy “priority support” helpline (i.e. message service) who still haven’t returned my call after 24 hours. Speeds now seem much better, a solid 160Kbps at the moment.

On Friday afternoon, after getting Sara’s car serviced at Yarra Valley Motors in Croydon, we paid a visit to our new local pub — The Oak Tree Tavern. :d 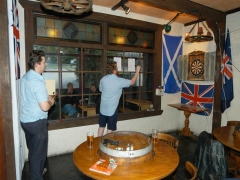 As you can see from the pictures, it’s a traditional English-style pub with tables made from big barrels, a dart board and a good range of draught beers. Surprisingly, for an Aussie bar, it has no “pokies” (fruit machines) at all. 🙂 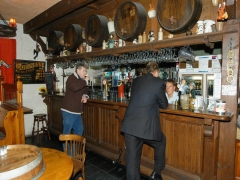 Whilst it isn’t in the same league as the King’s Arms, we quite like it. I was very pleased to find Old Speckled Hen on draught — served a bit too cold, but otherwise excellent — and Sara enjoyed a Stella. =p~ 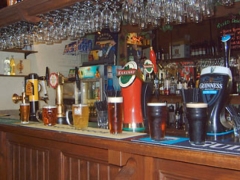 It was quite busy on a Friday afternoon, filled with locals enjoying a beer or two after finishing work. We people-watched for a while, trying to match customers up with regulars at the King’s. Posters on the wall advertised Quiz Nights and live music. They serve food but it is definitely a drinkers’ pub.

The only drawback is that even though I say it’s our “local” it’s actually 4.2kms away, at a place called “The Basin” — about a 50 minute trek from our house. I suppose the walk will do us good though. #:-s

By popular demand, I’ve just updated the Photo Gallery with a few pictures of the inside of our house. :”>

Please don’t ask about the lovely curtains or the white picket fence in the living room; these came with the house and wouldn’t necessarily have been our own choice. 😕

We don’t always keep it looking like this, so I hope you appreciate the effort it took to clean and tidy up so that we could show you these pictures. #:-s 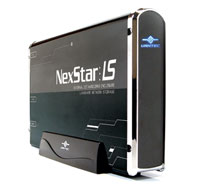 It’s been a while since I’ve written a techie post, but I’ve dabbled with several new gadgets over the past few weeks. Non-geeks can stop reading now. :-b

We’ve now got a Media Centre PC hooked up to the TV in the lounge, perfect for watching all the UK television programmes and football that we’ve been downloading recently. I managed to find copy of “Windows XP to MCE05 convertor”, which worked a treat. Sara is bang up to date with all her UK soaps and, after finishing the latest series of The Sopranos, we’re now working our way through Prison Break and Deadwood, which we didn’t catch first time around. @-)

All this downloading — about 150Gb this month — eats up a lot of disk space, so yesterday I decided to buy some external storage. I wanted something that could be accessed from either PC without having to mess about unplugging wires, like a small NAS box.

After a bit of research I found the Akasa Integral LAN enclosure, which sounded ideal at Â£50 in the U.K., but I couldn’t find an Australian supplier. After a bit more digging I found the NexStar “LANShare” (pictured above), which plugs directly into the ADSL router and, after installing NDAS drivers, appears as a local NTFS drive on both PCs. 🙂

The cheapest supplier in Melbourne that I could find was PC.Net.Au, who are based in a suburb called Elsternwick, about 30kms away. So we drove over and picked one up, taking the opportunity to look at Elsternwick, Elwood and some of Melbourne’s “posher” Bayside suburbs. They all look like nice places but, unfortunately, are a bit too pricey for us. 🙁

Then, on the way back, I called in at MSY to buy a big hard drive and picked up a cheap USB Skype phone at the same time. Hopefully Sara’s family will get sorted out with Skype phones/headsets soon. :)]

I’ve also had a play with Phil’s “SlingBox“, which looks very interesting indeed. Initial tests look promising — I was able to watch U.K. Freeview — but it was a bit blocky and jerky. Hopefully that’s just a bandwidth/lag issue (my ISP is having a few issues with international latency at the moment). The technology looks great though, I’m really looking forward to watching live BBC or Sky News.

I’ve also had a chance to look at VMWare Server and set up a virtual Windows 2003 domain, just to keep my skills up to date for when I start applying for jobs. It’s an absolutely superb bit of software, far better than the Microsoft equivalent. I really wish I’d found it sooner, as it would have made MSI creation and testing a much easier task.

Finally I’ve installed the latest Windows Vista release candidate (on a virtual machine) and it looks really good. Although I wouldn’t want to be using a beta operating system on a daily basis, I’m getting used to the new look-and-feel by using the “Vista Transformation Pack” on top of Windows XP.