I had my hair cut yesterday. It felt really strange going in to a different barber’s shop after going to the same one — John’s at the bottom of Sharples Hall Street in Waterhead, opposite the newsagent at the bottom of “The 39 Steps” — for the past sixteen years. ~X(

Normally I would just turn up and he’d say “the usual, is it?” and get on with the haircut whilst we chatted. He’d ask how Andy was getting on in Australia, tell me about his recent Ebay dealings and we’d talk about football, holidays, work or whatever.

So today I went to a quiet little barber’s shop in Boronia and had to explain exactly what I wanted. The haircut itself is OK — it’s difficult to get a clipper cut wrong — but there wasn’t much chat, so I’ll probably try elsewhere next time. I think I’ll give the one in Croydon a miss though, as the barber looks to be at least 90 years old and was asleep in the chair when I looked in. :-$

Edit: If anyone is passing John’s shop in Waterhead, please call in and say hello from me.

Today we attempted the “1000 Steps” walk, which starts at the Ferntree Gully Picnic Ground and finishes 5kms later at One Tree Hill. It doesn’t sound all that much but, because of the steep terrain, it’s a killer. #:-s

The Kokoda Walk, as it is known, commemorates a famous (?) World War II battle in Papua New Guinea. At various points along the trail there are plaques showing your whereabouts in relation to the soldiers on the original Kokoda Trail, along with a bit of history about the battle.

We rolled up thinking it would be a pleasant stroll up a bit of a hill but we soon found out it was a bit more than that. According to the website, “The physical effort required to complete the climb gives walkers a sense of the exhaustion experienced by the Australian soldiers following the trail during the Kokoda campaign in 1942”. 😮

Even the 15 minute walk from the car park to the start of the trail is hard work: it must be about a 1-in-3 gradient. Upon reaching the bottom of the 1000 steps, you see people taking it a lot more seriously than us: people who are in training, preparing for marathons etc.

It’s got to be said that the walk itself is spectacular: it’s like going up a never-ending staircase in the middle of Jurrasic Park. It was absolutely exhausting and, despite our efforts in recent weeks, proved just how unfit we really are. Whenever I needed a breather — which seemed like every five minutes — I took pictures, which you’ll find in the Photo Gallery.

After about an hour, we reached the “Eora Creek” marker. Red-faced, sweating and gasping for breath we were dismayed to find that, according to the “You are here” arrow, we were only about 20% of the way through the walk! :-s

Knowing that the park closes at 4:30pm, we realised we wouldn’t have enough time to reach the summit and get back to the car, so we had to give up. Going back down was a lot quicker and easier than coming up, but we had to be very careful not to trip or slip. :-??

On the way back down we passed another milestone — “Templeton’s Crossing” — that we hadn’t noticed on the way up. Oddly enough, it looked like we were going the wrong way and we were now closer to the end of the trail than before. Hmmm. 😕

It took a moment or two for it to sink in, but we eventually realised that the trail is shown right-to-left on the milestones so, when we thought we were only 20% of the way along the walk, we were actually 80% of the way through it. Another 10 minutes and we’d have done it. Aargh. >:p

Our legs felt like jelly by the time we reached the car and our calves will certainly ache tomorrow from the climb, but we’ll have another bash at the Thousand Steps next week and this time we’ll finish it.

Edit: We went back on Tuesday lunchtime and did it again. As predicted, the spot where we gave up last week was only about 200 steps from the top. The last part is definitely the most difficult bit of the walk: the steps are tall, rough and jagged, quite dangerous when slippery. It took me about 25 minutes from the bottom of the steps to the summit and I was totally shattered at the top; Sara was about 10 minutes behind. It’s certainly good exercise and we’ll work on getting quicker at it in future, but definitely don’t fancy it again this week. #:-s

This weekend we all drove down to Johanne’s mum’s sister’s house for a barbecue. \:d/

Marlene lives in a place called Maryknoll, which is about 60kms south-east of us, in rural Gippsland. It’s quite an adventure getting from the main road to their house in Sara’s little car because you have to go along a hilly, unsealed gravel track for about 4kms. We made it OK but you definitely need a 4×4 if you’re going to live somewhere like this. #:-s

The place is absolutely stunning though, with breathtaking panoramic views on all sides, paddocks where they keep alpacas (like small llamas), and wild deer and emus roam the neighbouring fields. :d

(Their house is currently up for sale, see this website, but the photos don’t do it justice at all — it’s a magnificent property.)

Marlene’s husband, Murray, took charge of the barbecue duties in their huge barn/shed. We brought along kangaroo fillet and lamb steaks, which I’d cut into cubes and shoved on skewers. It seemed to go down quite well because, surprisingly, not many people at the barbecue had tried kangaroo before. 😕

Not wanting to risk navigating the unsealed roads after dark, we left quite early and headed back home to try to watch the United vs Fulham game, a fairly civilised 10:30pm kick-off over here. (:|

After a lot of messing about, I eventually managed to find a decent quality Chinese ESPN streaming broadcast (with Sky commentary in English). It seemed odd not being at Old Trafford and, for once, I even managed to correctly predict the final score… I wonder if the lads back home had a bet? 😉

Here’s a Super Mario Parody which is quite funny. There are a few others on the Jerry Jackson website that made me laugh too. :))

We’ve been out and about again this week, making the most of the sunny days and getting plenty of fresh air. 🙂

As well as walking the Dorset Trail again, we also did the Croydon Hills Walk. We didn’t take the map out with us, so we probably missed out some parts of it but it was very nice nonetheless.

This weekend we went to Laura’s 10th birthday party at “Awesome Fun”, a nearby children’s indoor play centre (with another amateur website). I’d never seen “fairy bread” before, is this an Aussie thing? Ugh! :@)

On Sunday we planned to hike up “The Thousand Steps” (Kokoda Memorial Trail) but decided against it — for now. :”>

Instead we drove up to Grant’s Picnic Ground — known to us as “The Parrots” — with Andy, Johanne, Laura and Caitlin. We did a short walk through the forest and then stopped at the picnic area for a coffee, watching the tourists hand feed the cockatoos and parrots. We’ll definitely go back and do one of the longer walks soon and I’ll try to remember the camera next time. 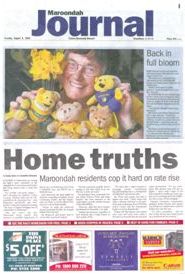 Here’s a scanned copy of our local newspaper, the Maroondah Journal, so you can see what’s going on this week where we live.

I’ve just added a few pictures of our new house and neighbourhood to the Photo Gallery.

As you can see, it’s all very “Ramsay Street”, which isn’t surprising because they actually film Neighbours in the nearby suburb of Vermont.

Thanks to the wonders of the Internet, I managed to watch both of Manchester United’s friendly games in the LG Amsterdam Tournament this weekend. :d

I won’t post the details here in case they close down the sites, but I was pleasantly surprised to find decent quality live streams with full English commentary. Not only that, I’ve also found free streaming access to MUTV and a selection of over 30 live football matches this week. b-)

I seriously considered getting up early to watch the United vs Porto game yesterday, but just couldn’t get myself out of bed in the middle of the night for a meaningless friendly game. Luckily they repeated the entire match later on, so I watched it at a more civilised hour. I gambled that they’d do the same thing with the United vs Ajax game this morning and they did. 🙂

Rooney and Scholes were both sent off in Friday’s game and, if their red cards are carried over to the domestic league, will miss the first Premiership games. New Â£18M signing Michael Carrick went off injured after just fifteen minutes of Saturday’s game and also looks doubtful for at least a couple of weeks. 🙁

It was good to see some of the youngsters getting a run out. Rossi looked very impressive again and will hopefully feature more this season now that Ruud has gone. But Darren Fletcher, who I slated constantly last year, looks like he’ll be getting even more verbal abuse from me this season. :-@

I’ve stopped blogging every single day now that we’re settled in and things are becoming more normal. It still feels like we’re on holiday, but routine things like shopping and paying the bills soon bring us back down to earth.

Err, so what can I tell you about…

Even though we’ve hardly been anywhere yet, we’ve already managed to clock up 1200 kms on Sara’s little car in the past three weeks, so we ought to get it serviced soon. Cars are quite funny over here — I’ll definitely have to blog about them separately at some point. ;))

Edit: I’ve added a few pictures of Frankston beach in the photo gallery.