We were woken up at 5:45am this morning by our migration agent, George, calling from Australia. He received a letter from DIMIA yesterday:

I refer to this application for a Class BQ subclass 139 Skilled â€“ Designated Area Sponsored visa.

I am pleased to advise that the application has been approved and the permanent residence visas were granted on 28 February 2006.

Granted visas have the condition that at least an initial entry to Australia is made by all applicants no later than â€“ 8th November 2006. Please note that it is not possible to change this date.

A big drink is in order tonight. <:-p

It’s been a while since I’ve blogged about football even though I’ve still been going to the home games and watching all the aways on the telly. I probably should’ve blogged last week after the replay against the Scousers but, after seeing Alan Smith’s broken leg, I didn’t feel like it. 😮

Having declined all my Carling Cup tickets in the earlier rounds (because I expected to be in Australia months ago), I wasn’t in Cardiff for the final. With no big screen at the King’s Arms or Bull’s Head, I settled down to watch the game on Sky. A couple of large bottles of Pilsner Urquell got me right in the mood and I was shouting at the TV throughout. :-t

Louis Saha, whose goals basically took United to the final, was given the nod ahead of Ruud Van Nistelrooy. The only other surprise was John O’Pie returning to partner Giggs in central midfield rather than “The Scottish Player”. It was a very open first half, with plenty of chances at either end. Wes Brown, Man of the Match for me, made a few solid challenges at the back; Wayne Rooney, who had already hit the bar early on, took advantage of a mix-up between De Zeeuw and Chimbonda to score United’s first.

United scored three in ten minutes after the break: Saha tapped home a well measured Gary Neville cross; Ronaldo fired in an easy layoff from Saha from the edge of the box; Rooney turned in a flick-on from Ferdinand following a United free-kick. =d>

Wigan were thoroughly beaten so Fergie brought on Richardson, Evra and Vidic for the last 15 minutes. Van Nistelrooy rightly looked upset at being snubbed, prompting the usual speculation about his future at Old Trafford. It’s funny how everyone, including Fergie, seemed to enjoy the celebrations so much despite not giving this competition much credit in recent years. 😕

My afternoon was topped off by Sara preparing a full Sunday Roast dinner (turkey and all the trimmings, in case you were wondering) timed perfectly to coincide with the final whistle. I wish I’d been there – Cardiff is a great place for Cup Finals – but I’m glad I don’t have to make my way home tonight. :p

Owning a car can be very expensive. I sometimes wonder whether it’s worth it:

It’s Half Term at college, so we’ve got a chance to carry out some important maintenance work while most of the users are away:

I’ve not gone into work today. I’ve got man flu. 🙁

I’m still working but at least I can sit here in my dressing gown, feeling sorry for myself.

Luckily there’s plenty of stuff I can do by e-mail (35 messages sent today already) and I can access most servers remotely too. It also gives me a chance to read through a few things that have been sat on my desk for a while.

I’ve got loads to do this weekend and a really busy week planned at work next week, so I really need to get well asap. I’m going to dose myself up with cold remedies, get plenty of vitamin ‘C’ and maybe have a medicinal drink or two later on. (:|

A few weeks ago I bought one of these things.

It’s basically a tiny freeview box which allows you watch Digital TV on a PC or laptop. I bought it so I could have Sky Sports News on in the background while I’m working or messing about the PC at home. Even though we don’t officially live in an area where you can get Freeview, I can still pick up over 40 channels with an indoor antenna. :d

The software that Freecom provide is pretty poor but I found that several other manufacturers sell exactly the same gadget bundled with their own software, so I’ve downloaded some different drivers which are much better.

In fact, the “Yakumo” drives that I’m using are “BDA” compatible which means I can even set up this gadget as a PVR using Windows XP Media Centre Edition or MythTV. I tried a few different packages before settling on the excellent GB-PVR.

Not bad at all for Â£32 and it will even continue to work when we get to Australia. :”>

Sara is now officially a non-smoker. (*)

Rather than doing it as a New Year resolution – which would probably fail – she decided to give up smoking on 1st February. <:-p Keeping herself busy seems to have been the key; someone at work gave her a couple of knitting needles and a ball of wool, so she's been busy knitting a... thing... for the last week. It's hard to say what it is, it's just like a big blue odd-shaped sheet with quite a few holes in it. But it keeps her occupied. She's sold off her remaining stash of duty-free cigarettes, so she must be serious about it. We've even been to the pub tonight and she didn't cave in there either. And she's not half as grumpy or emotional as I expected. =d> 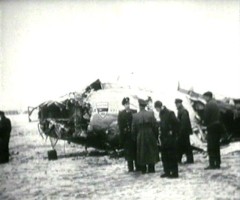 On 6th February 1958 the airliner carrying players and backroom staff of Manchester United, plus a number of journalists and supporters, crashed in a blizzard on its third attempt to take off from Munich airport. United were returning from Belgrade where they had just beaten Red Star Belgrade in the European Cup and had stopped off at Munich for re-fuelling. Twenty-three of the forty-four passengers on board the aircraft lost their lives.

Click here to listen to “The Flowers of Manchester”.

Someone at work introduced me to a brilliant website called Pandora today.

It’s a bit like an intelligent jukebox: you start of by telling it what music you like and it plays a selection of tunes from the bands you have chosen. After playing a couple of tracks it starts to suggest other music that you might like, based on the style of music you’ve chosen already. You then indicate whether you like the new music or not and it learns as it goes along. \:d/

It’s really handy when you want to listen to some music but you don’t have access to your own collection. :-“